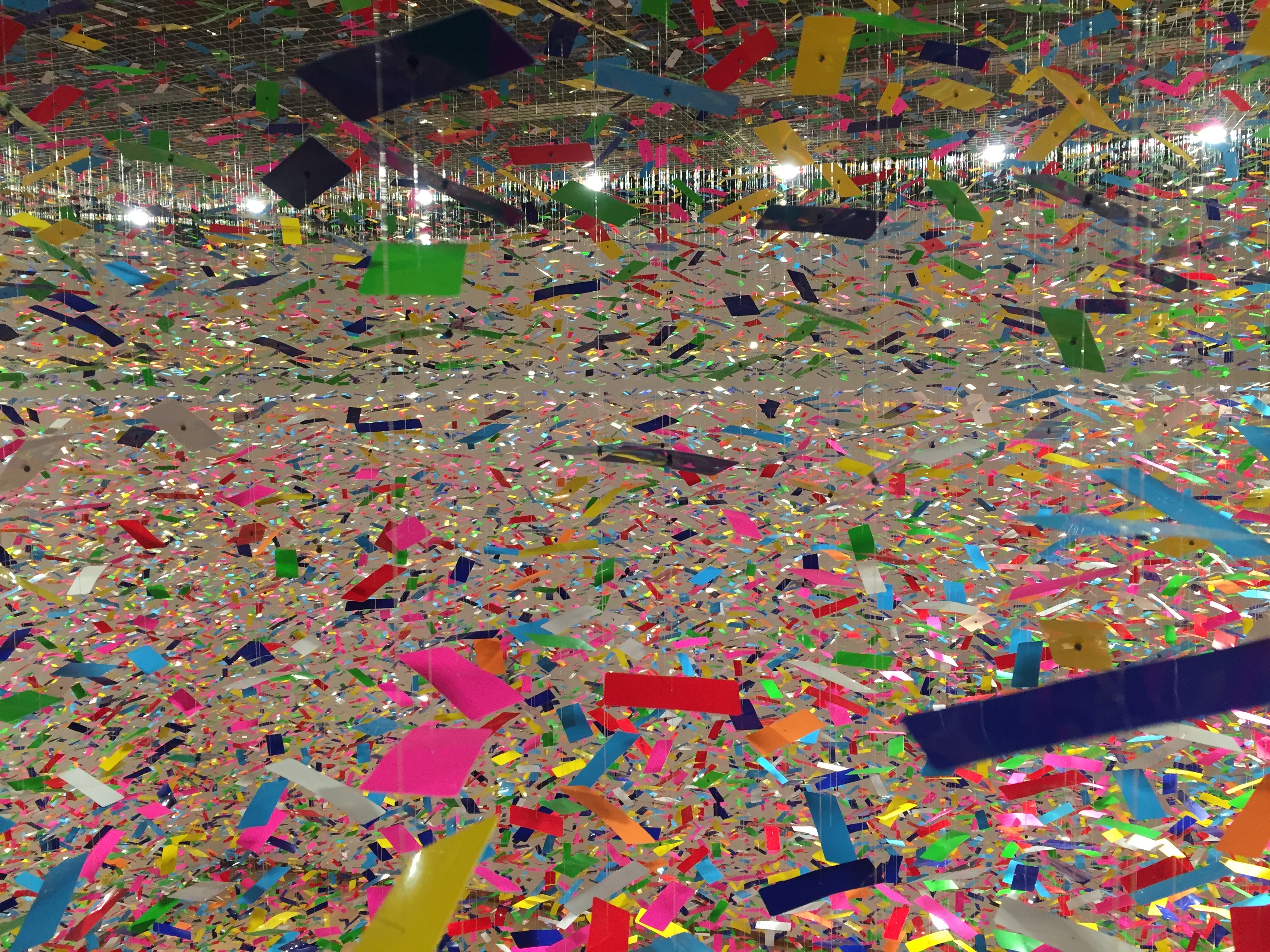 It was around 5pm when I got up from an unexpected nap to an email notification. It stated that my talk proposal “Parallelism in Python” has been accepted at Kiwi PyCon X, New Zealand’s Annual Python Conference! It took me some time to remember when I had applied and also to wake up to make sure I wasn’t having some random dream.

After talking to my family about the opportunity and making sure that the conference dates do not clash with any exams, I decided to go and get started with the visa process as soon as possible. After all the mindless haggling and tireless procedures with the paperwork, I got my visa in about 2 weeks.

The entire travel time from Hyderabad to Wellington was 27 hours with a 12 hours layover in Bangkok. I had plenty of time to explore the airport, try some Thai food and take a short nap. 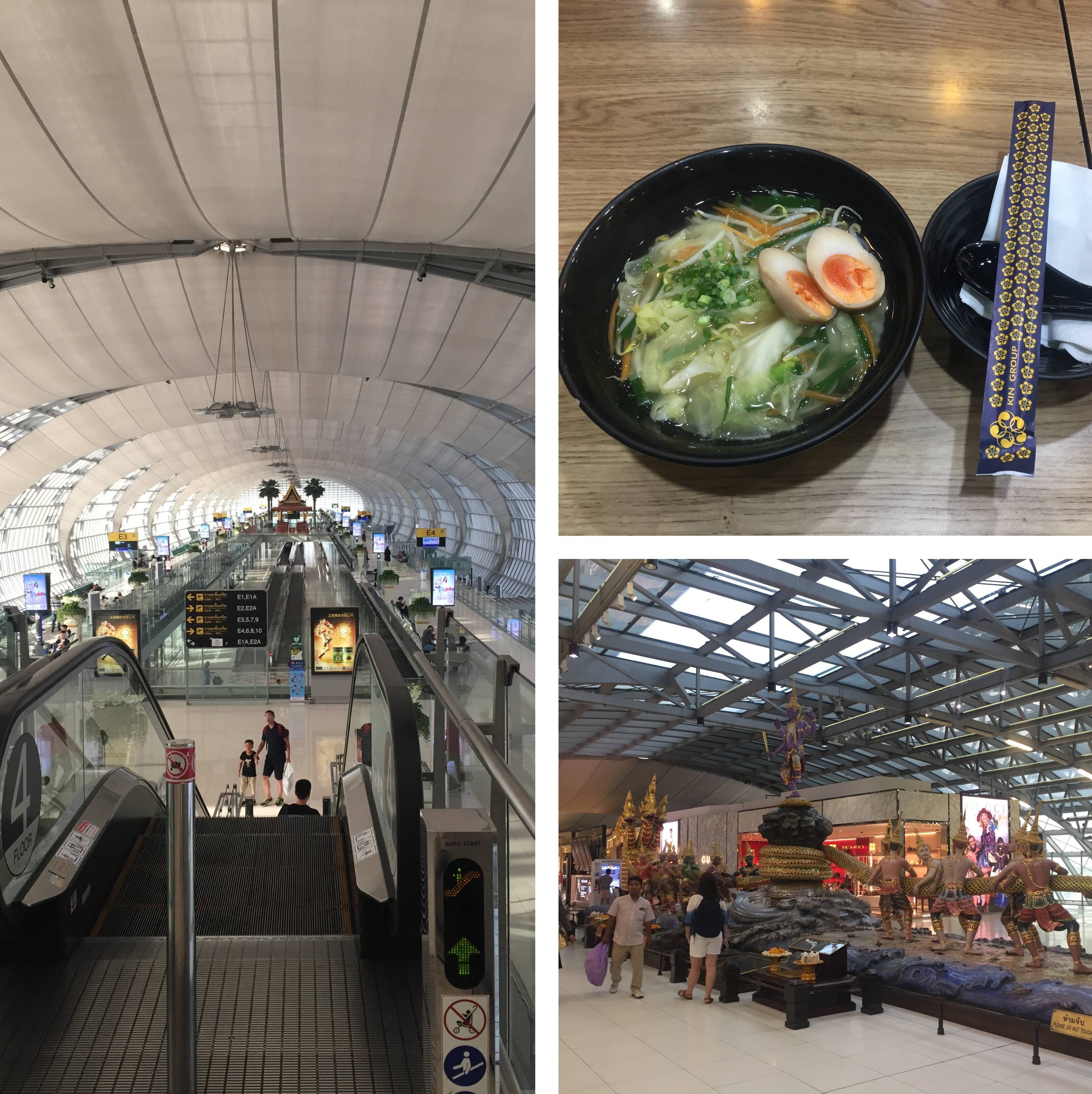 I was rusty by the time the layover got over and hungry as well. The travel time from Bangkok to Auckland was 10 hours. I slept almost all the way to Auckland even though I had taken a lot of naps at the Bangkok airport. From Auckland, I had a domestic flight to Wellington which was around 45 minutes. The view from my window got me really excited. 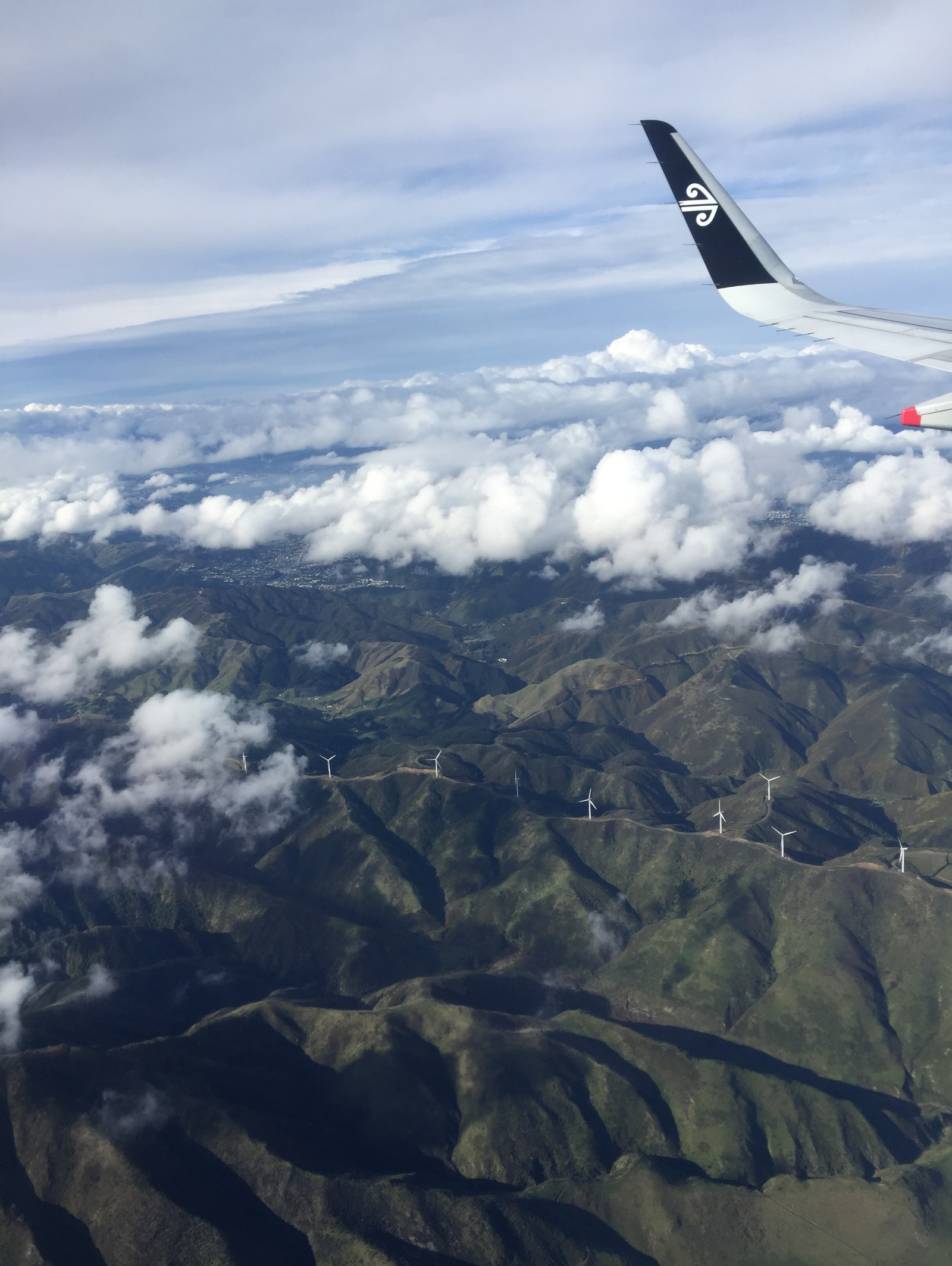 As soon as I stepped out of the airport, I realised that I had underestimated the weather big time. Although, It was chilly in a good way(around 5°C). While I was in the car, I noticed the wooden houses on the hills which were looking beautiful, the waterfront, islands around the city and Mount Victoria. 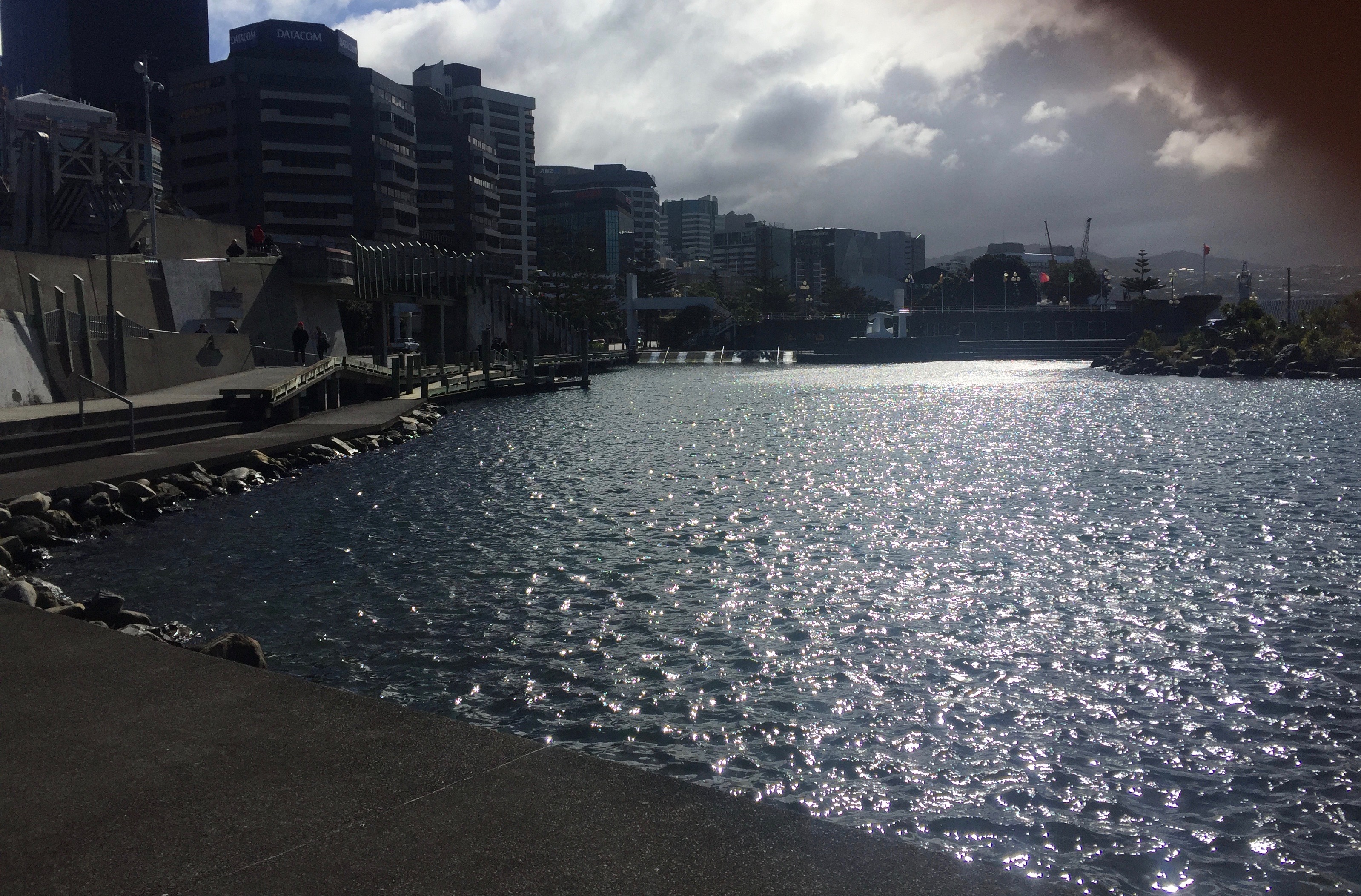 I was staying with some friends of my cousin and the house was in the outskirts of Wellington in a city called Lower Hutt. The neighbourhood was calm and beautiful. There were only independent wooden houses in the neighbourhood with a small lawn. Suburban rail services between Wellington and Lower Hutt run half-hourly for most of the day and evening. The commute is only 20 minutes long and has a great view of the sea while going to the main city. 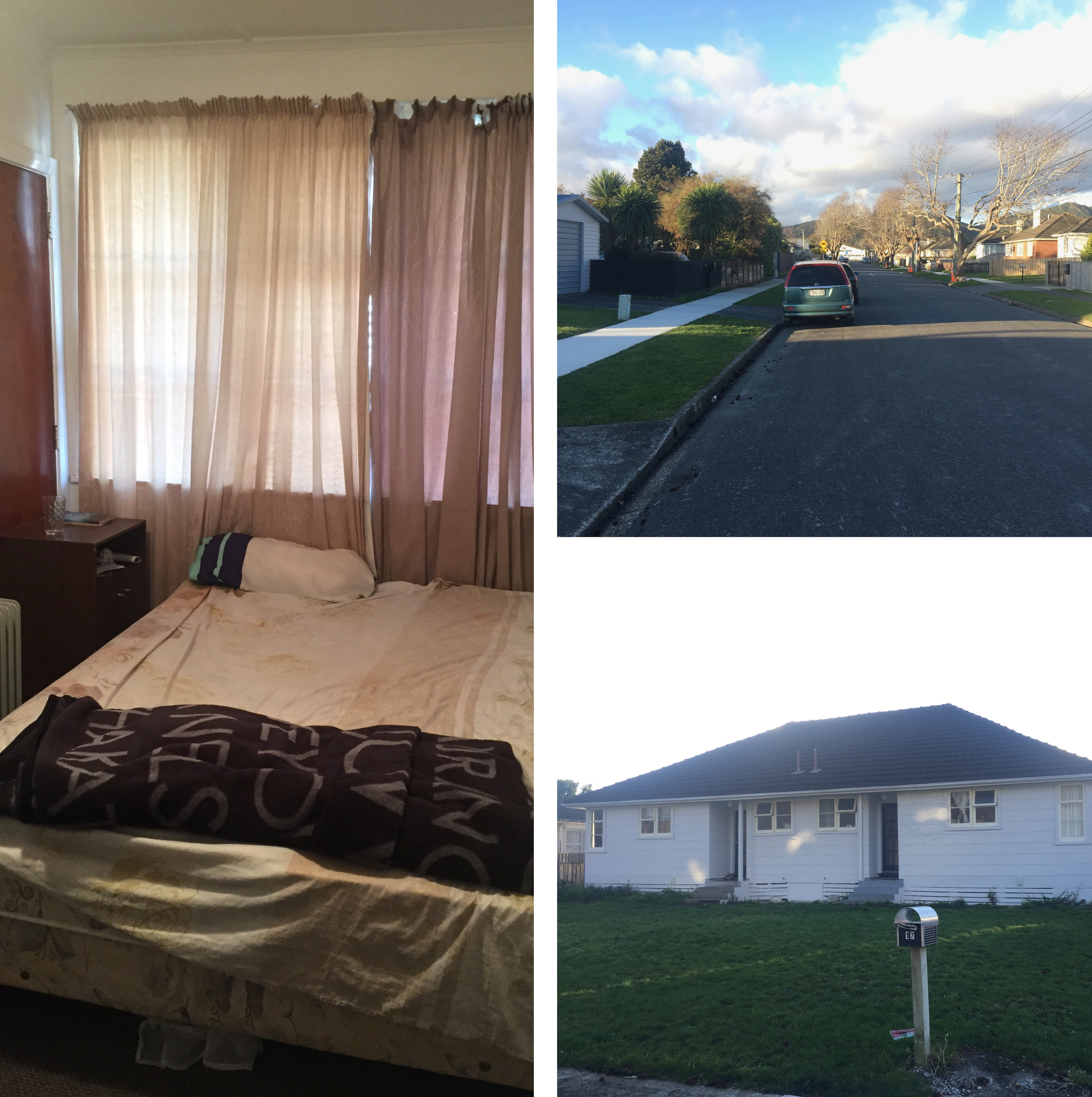 I had two days to roam around the city before the conference started. The aim was to finish all the major touristy places in 1.5 days and spent the evening before the conference preparing for it. Also, thanks to the subreddit r/Wellington for clarifying all my doubts regarding the city and also to its wiki for some really good recommendations.

I started with the Te Papa Museum because it’s huge and takes an average of 3 hours to finish. Te Papa is often described as the best free activity in New Zealand. The museum explores the great treasures and stories of this country – its unique natural environment, Maori culture, art heritage, and fascinating history. 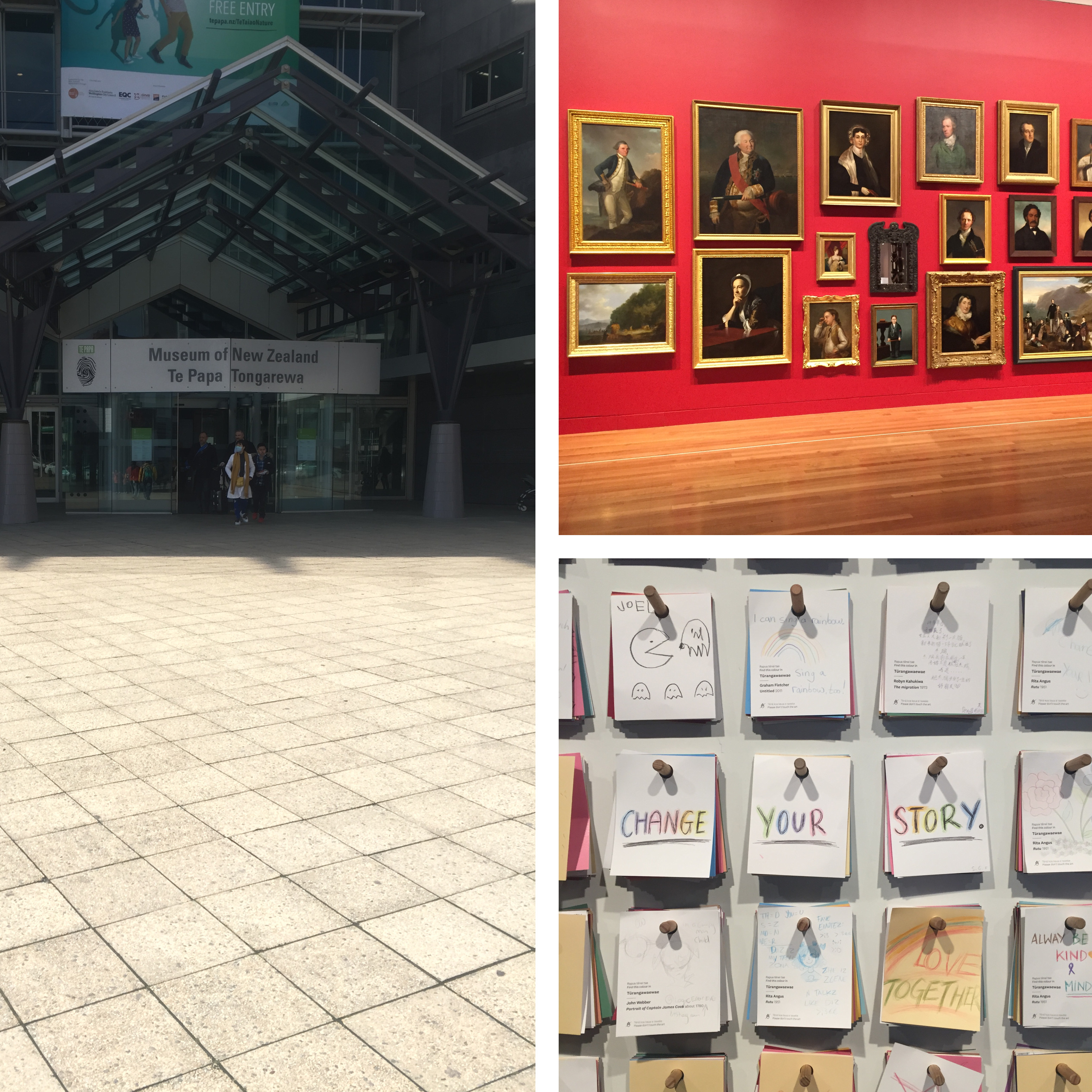 After Te Papa, I hung around for some time in the Frank Kitts Park (Wellington’s waterfront) which looked beautiful in the afternoon. The park is home to the Wellington Underground Market held on Saturdays which supports local artists, designers and small businesses. I was surprised to see multiple diving boards across the seaside promenade and people swimming in the water which was around 7°C. Respect. Wellington is known in New Zealand, and around the world, as ‘Windy Wellington’ due to the frequent strong, gusty northerlies that Wellington experiences. I experienced the wind in the park and it was really strong. I could see electric scooters falling, dustbins rolling on the ground and people trying hard to go in the opposite direction of the wind. 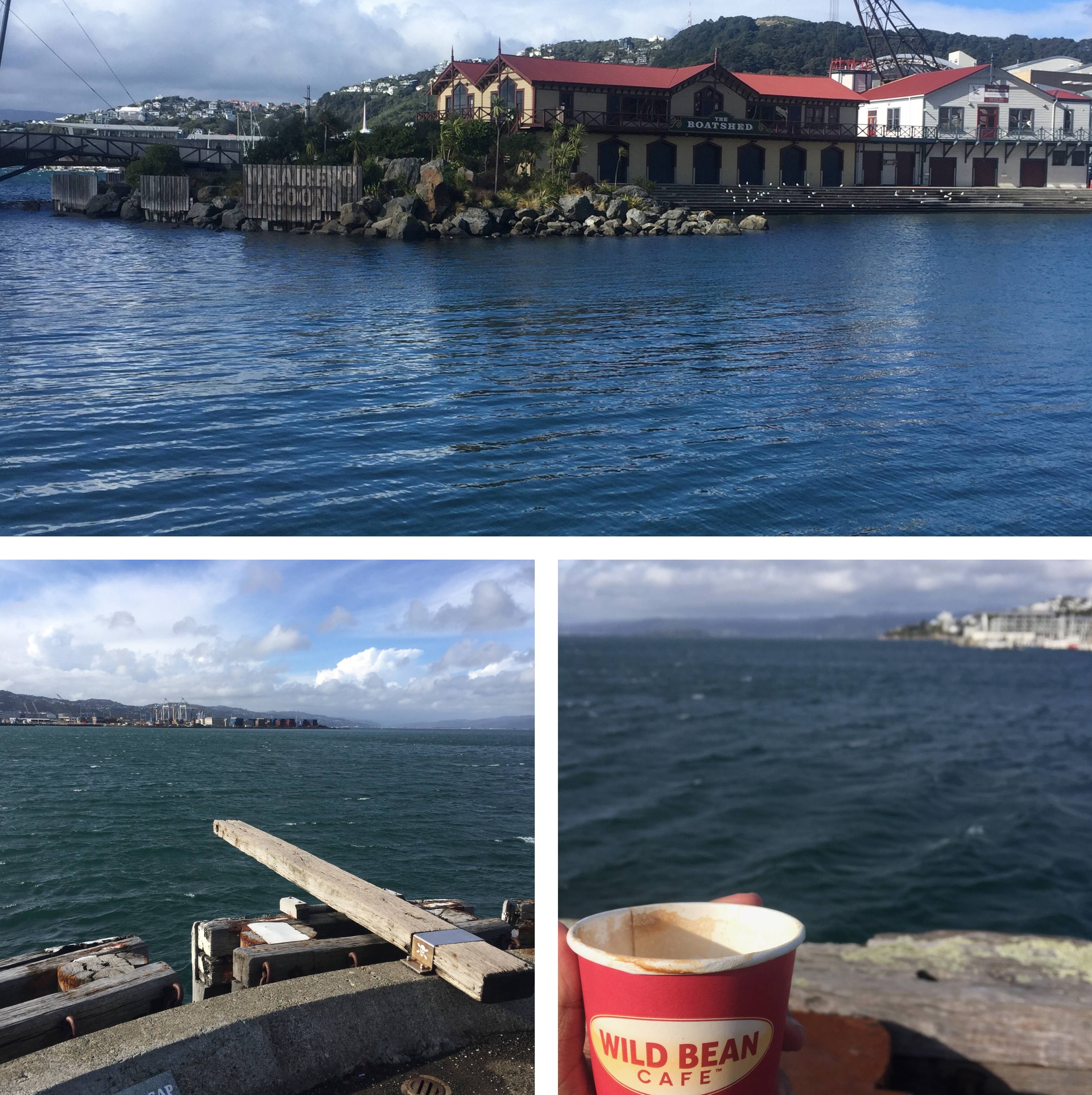 It was around 2 pm when I realised that I didn’t eat anything since morning. One of the typical dishes of Wellington is Pie & Coffee. I tried flat white coffee for the first time and it was really good. The Pie is usually spicy and filling. After lunch, I roamed around the city for an hour or so. I was intrigued by the street art on most of the buildings and alleys.

While walking on the streets, I noticed a ticket counter at the end of an alley. To my surprise, there was a cable car pathway inside the alley going up to the top of Kelburn Hill! The ticket was a bit costly but the experience was worth it. At the top, there is a platform to get panoramic views of the city and harbour Te Whanganui-a-Tara. There are several ways to get down into the city: You can walk around the hillsides of the Botanic Garden, including a beautiful 40-minute stroll back down to Lambton Quay via historic Bolton Street Cemetery and the Beehive or just take a return ticket to the city. On top of the hill, there is a Cable Car Museum. Situated within the original Winding House, the Museum has a nationally significant collection including two of the original grip cars and the historic winding machinery. 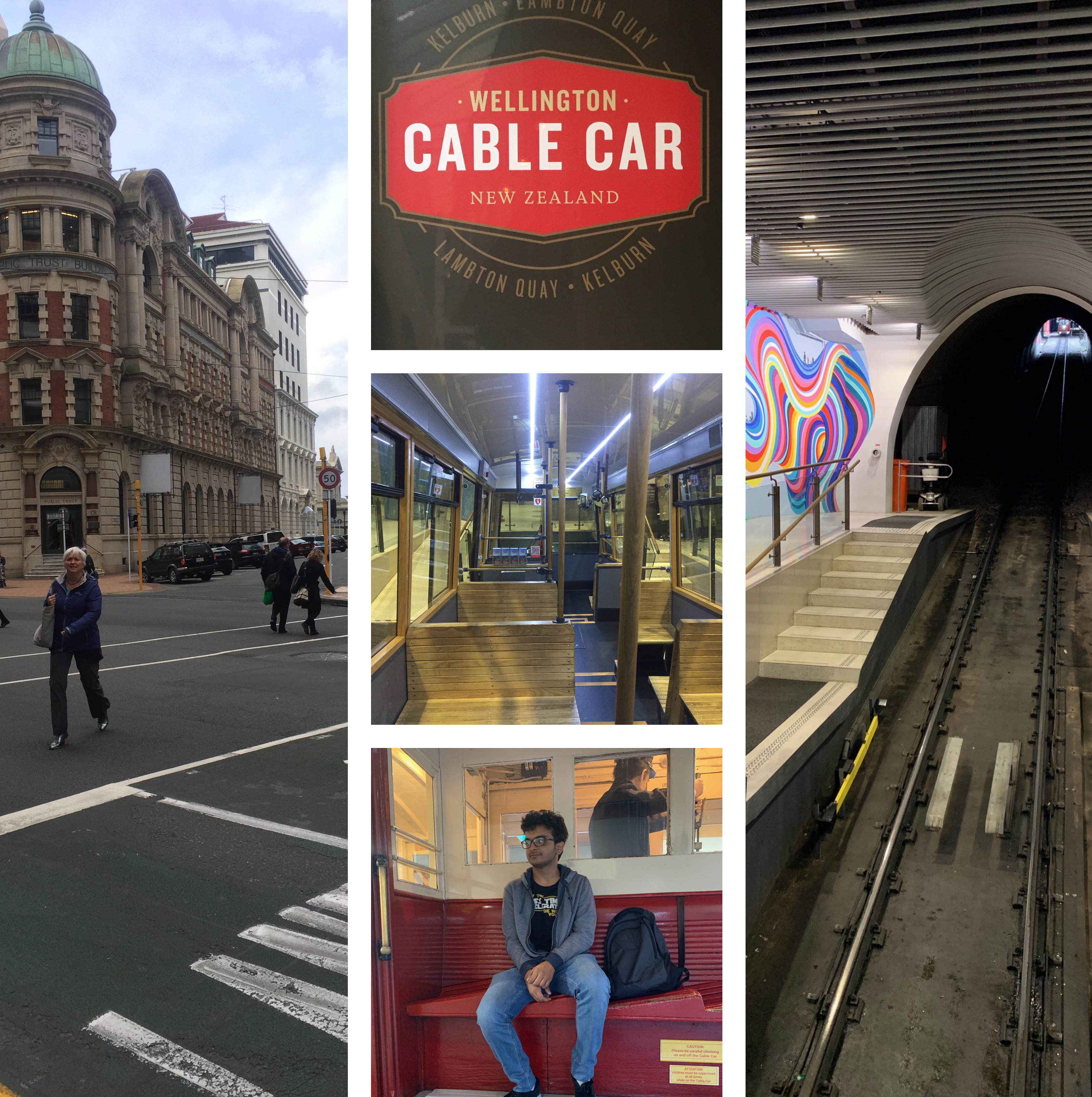 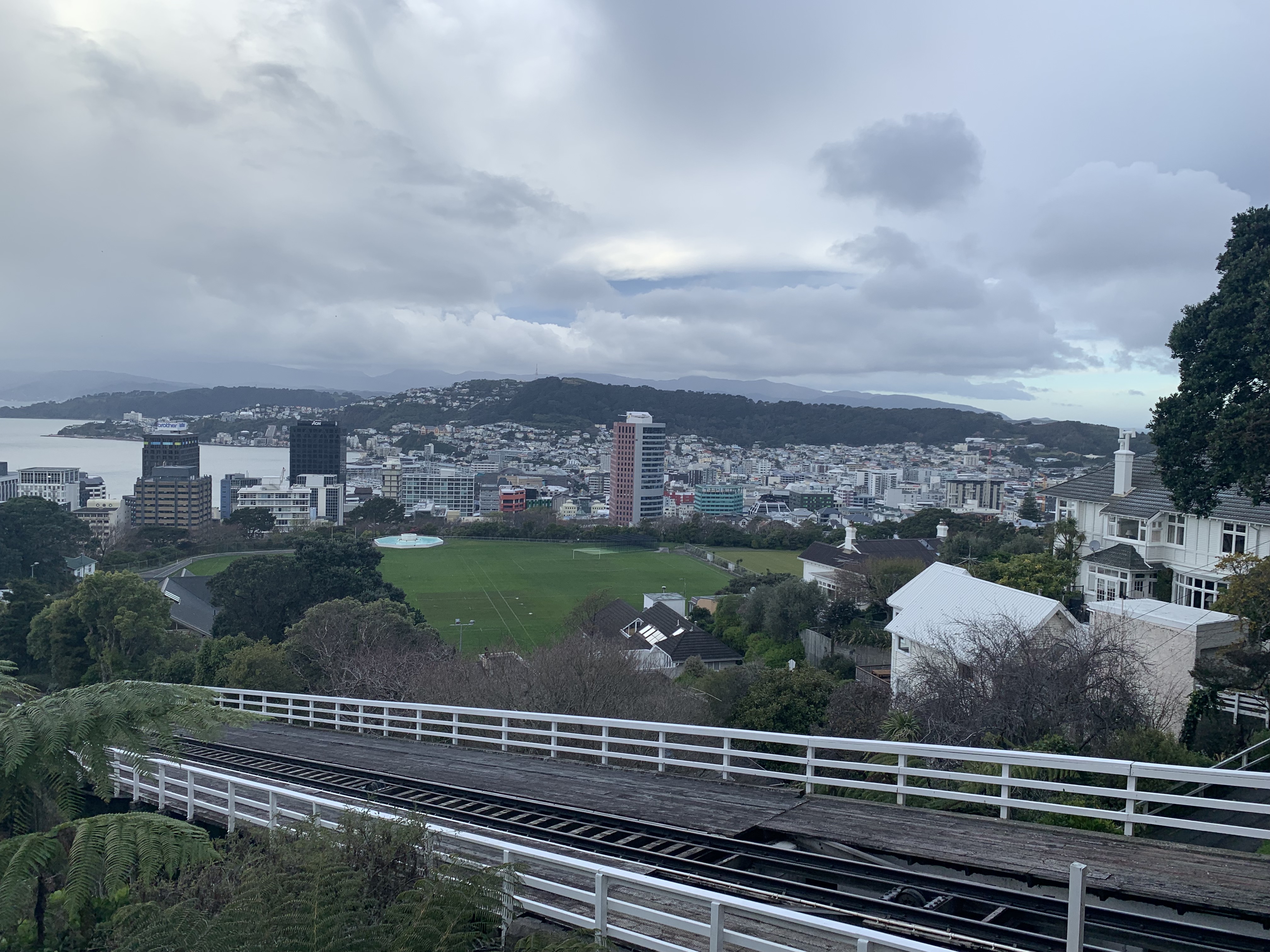 After spending a good 1.5 days travelling around the city and trying good food and coffee, I sat down in the evening to prepare one last time for the conference.

The next morning was to be the first day of Kiwi PyCon X, where I was slotted to give a talk later at 11:30 am. I was excited as well as scared as this was going be my first international conference. Add that it was going to be my first PyCon Talk. 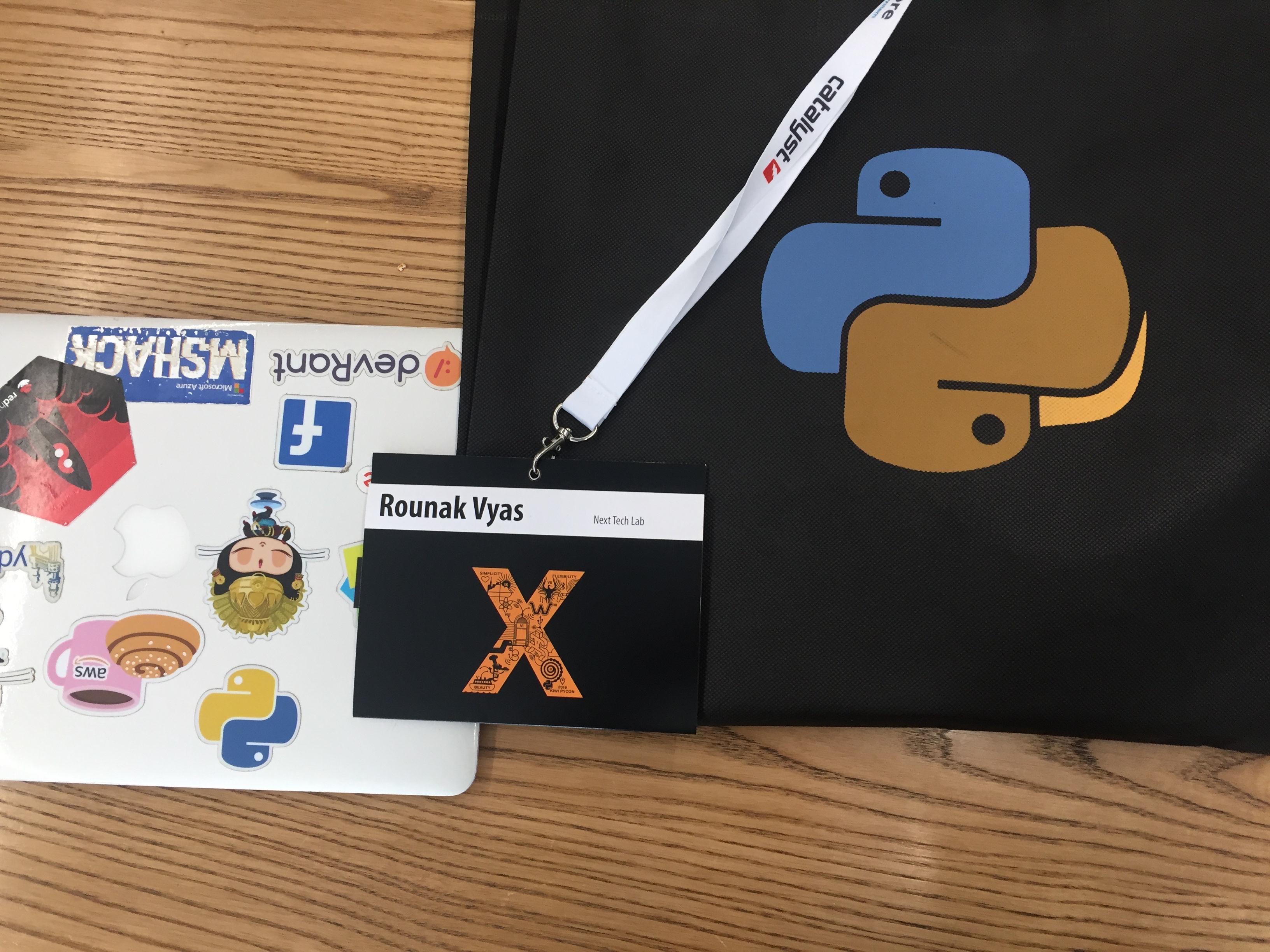 To prepare for the talk, I had made the slides and asked my colleagues and friends to review them. To make sure that the formatting of the slides is perfect, I used slidelint. It is a slide checker which checks for common issues in presentations. I found it pretty neat and to the point.

To frame the content of the slides, I found this post which is a 3-part series preparing for a tech talk. In the posts, he explains the What, Why, and How of a talk and how to build the outline. I found the series really helpful and informative.

As with the conferences I have attended in India, this was quite different in the sense that it had a lot more diversity in terms of the demographics where people were coming from. We had people coming from the United States, China, Japan, Australia and more. It was amazing to see how PyCon brought all of us together. 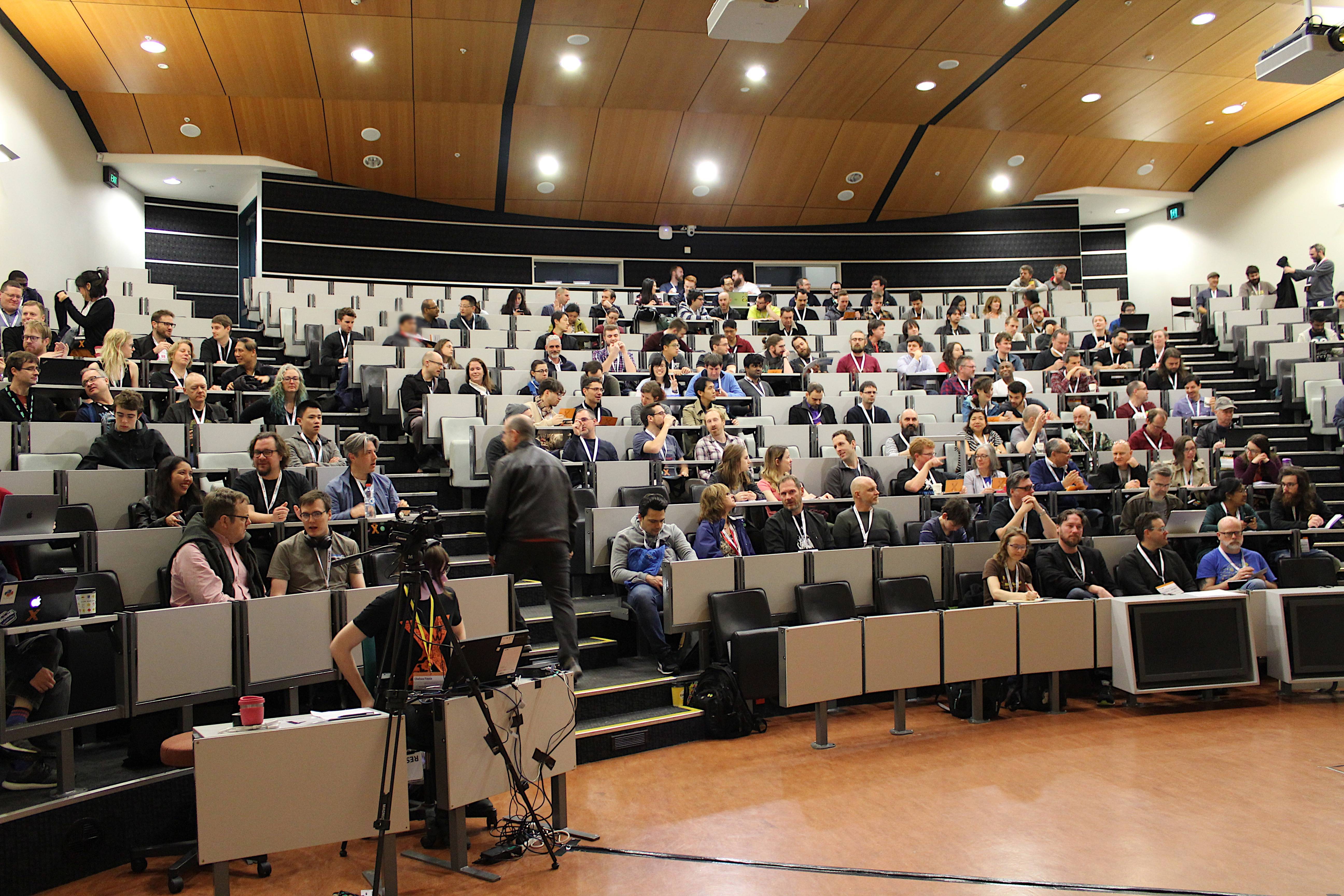 The conference started around 8:30 am with the registrations after which was the Keynote. My talk slot was at 11:30 am. I was nervous, scared and excited all at the same time. The time had arrived and I think I did okayish while giving my talk. I did rush through it. There’s a lot of space for improvement (a lot). Here’s the recording of my talk, again. 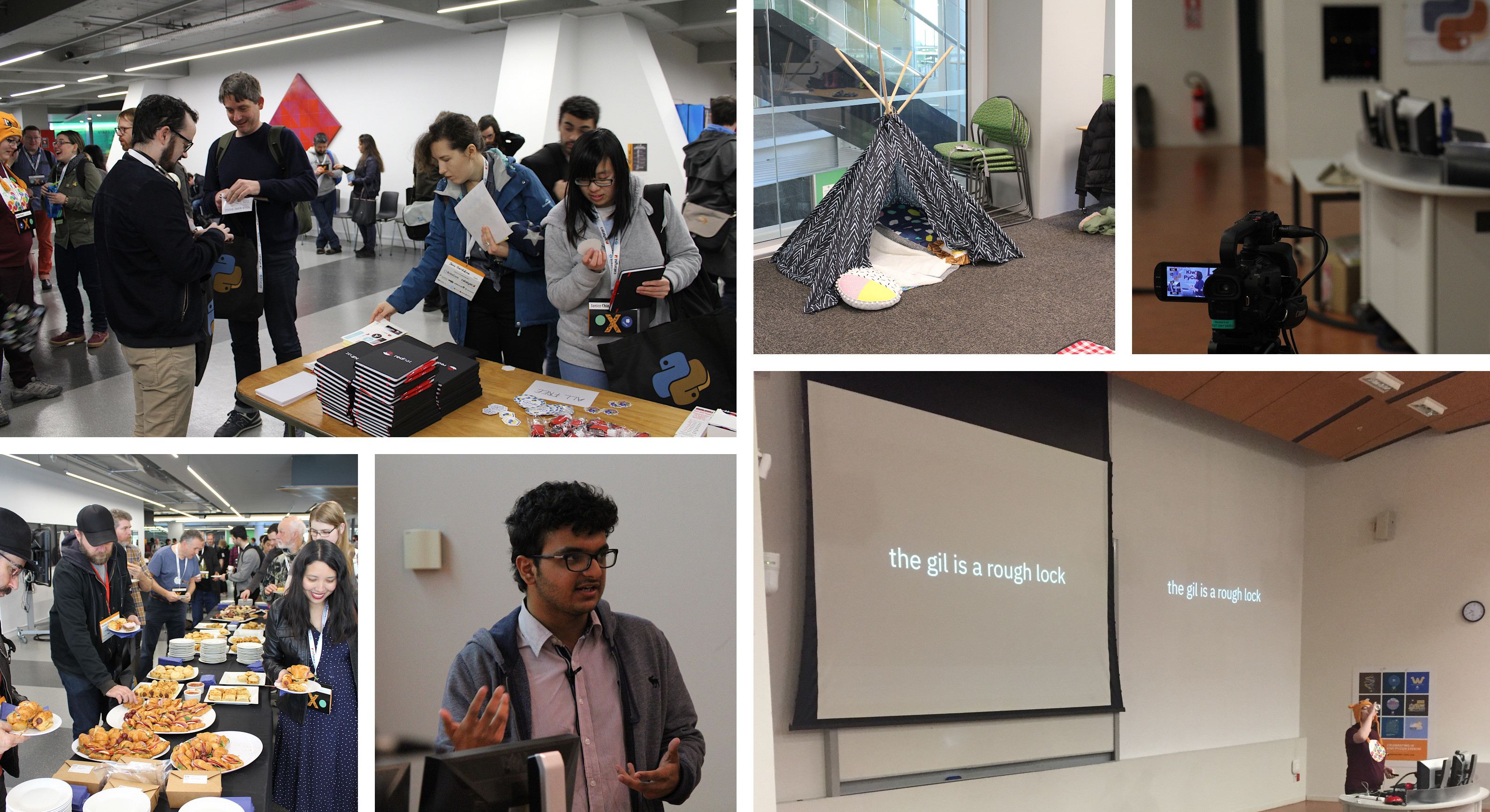 I had a lot of good converstations about the python standard library, open-source, work culture in New Zealand, etc. The converstaion went on for long durations, and once we started talking about pip packaging and ended up discussing the essence of Chinese names! The talks were interesting and I learned a lot from them, especially “How to Write Python Code Others Like to Use” by Anna Tisch.

The conference ended on 25th August and so did my time in Wellington. I had my flight to Auckland the next day. As there were no exams clashing with the conference dates, I had decided to extend my stay for 3 more days in New Zealand to visit Auckland. I’m very grateful to the people back in Wellington to be very accepting and kind. 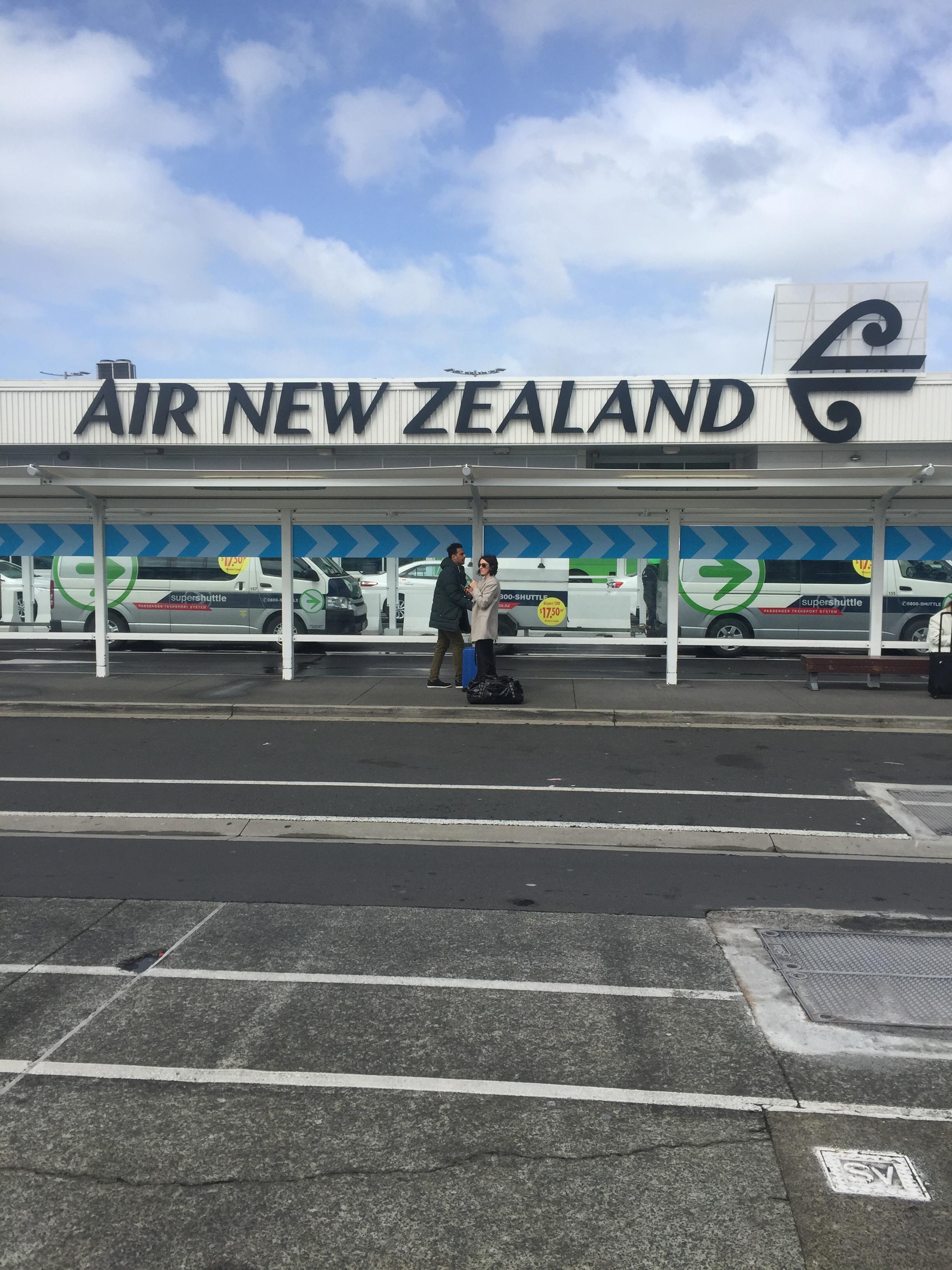 You got to make the most of having a cousin staying at an exotic place like New Zealand. As I only had 3 days to roam around, I turned to r/Auckland and its wiki for the must do things in Auckland.

Although Wellington is the capital, Auckland is bigger and has a lot more diversity in terms of the people living there. The weather was more or less the same as Wellington but it did get a bit hot in the afternoon. 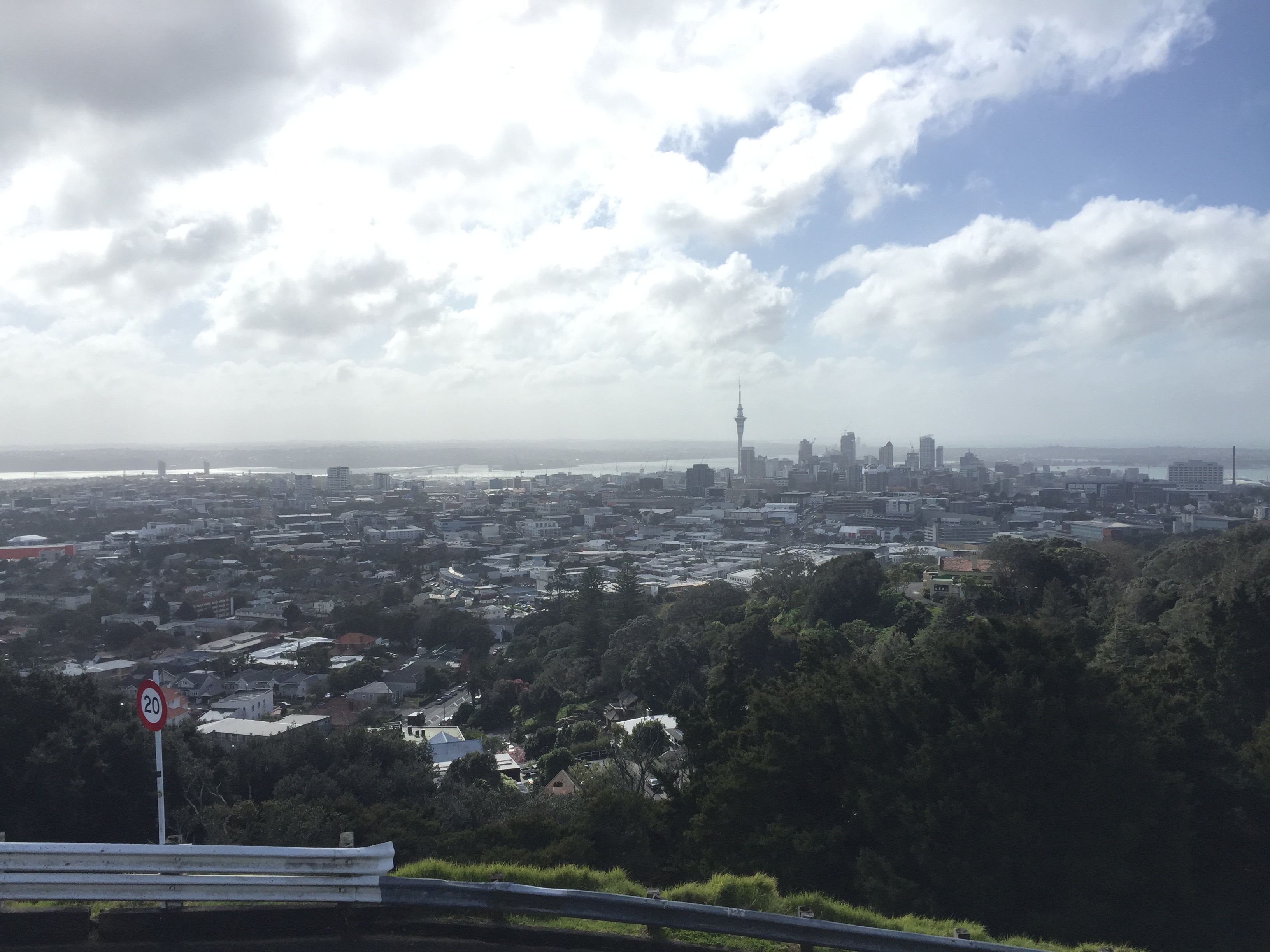 We started the first day with a hike to Mount Eden, one of the top attractions in Auckland. This dormant volcano, which is completely covered with grass, offers some of the best views of downtown Auckland. It’s also the highest natural point in Auckland. It took us around an hour to get to the top on foot. While on the top, I could only imagine what it would feel going down the slope on a bicycle. 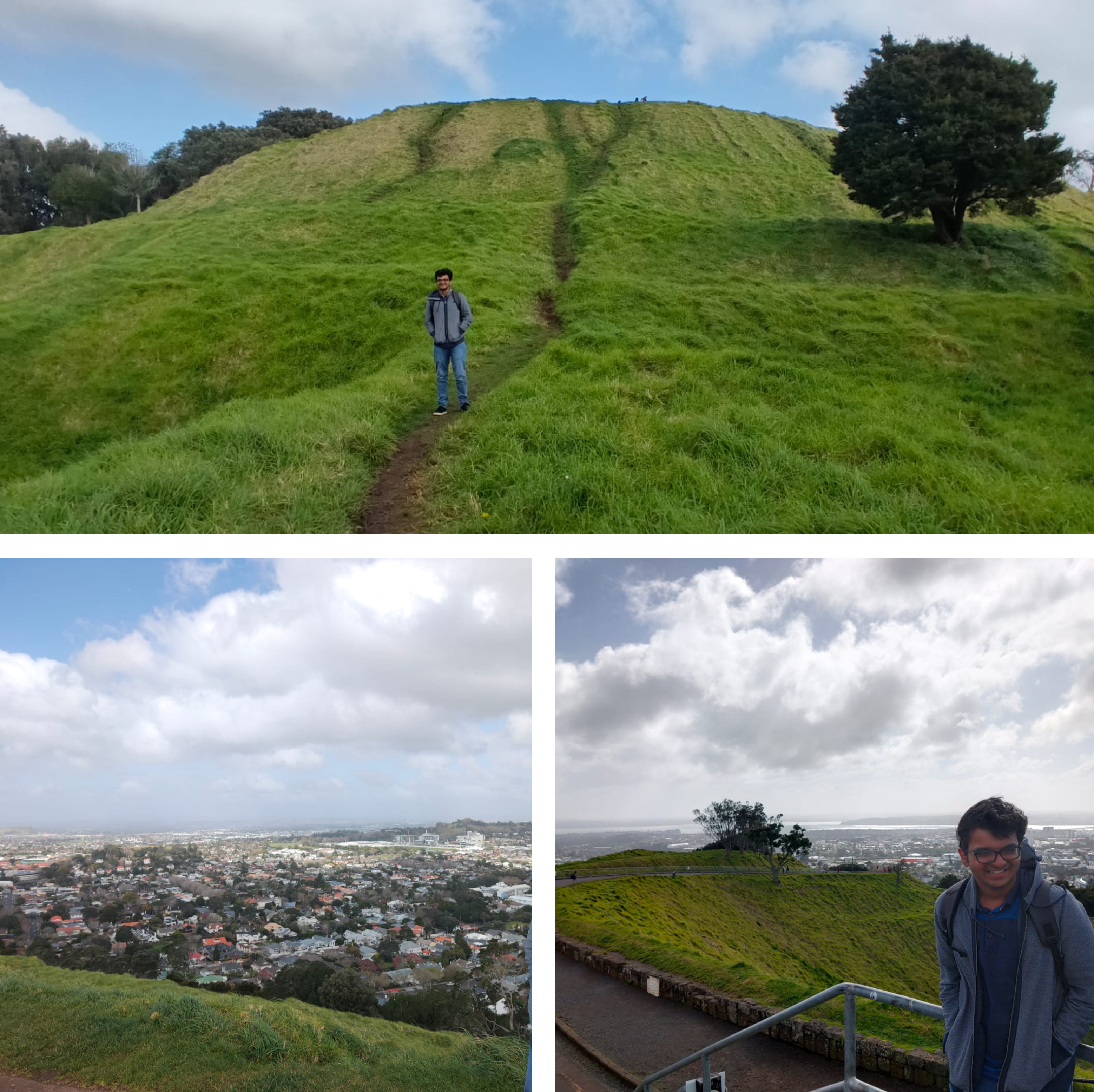 After the hike, we went to chill at the waterfront. Mission Bay is the waterfront haven for all Aucklanders. We just drove by the place, stopped at some points to explore the surroundings and relax. Just like Wellington, there were diving boards and stairs to the water. I really really wanted to jump into the water but my cousin warned me about the temperature and we didn’t even have the proper swimsuit attire which would make it easier to swim in cold waters. After lunch we went to the St. Patrick’s Cathedral Church which was founded by the first bishop of New Zealand. It dates back to the 1800’s and churches are always interesting to take a walk through to admire the art and architecture. At night, I roamed around the city, mostly in the busiest street called Queen Street. I visited the Auckland Art Gallery, tried some fancy deserts and hung around some coslty yatches. 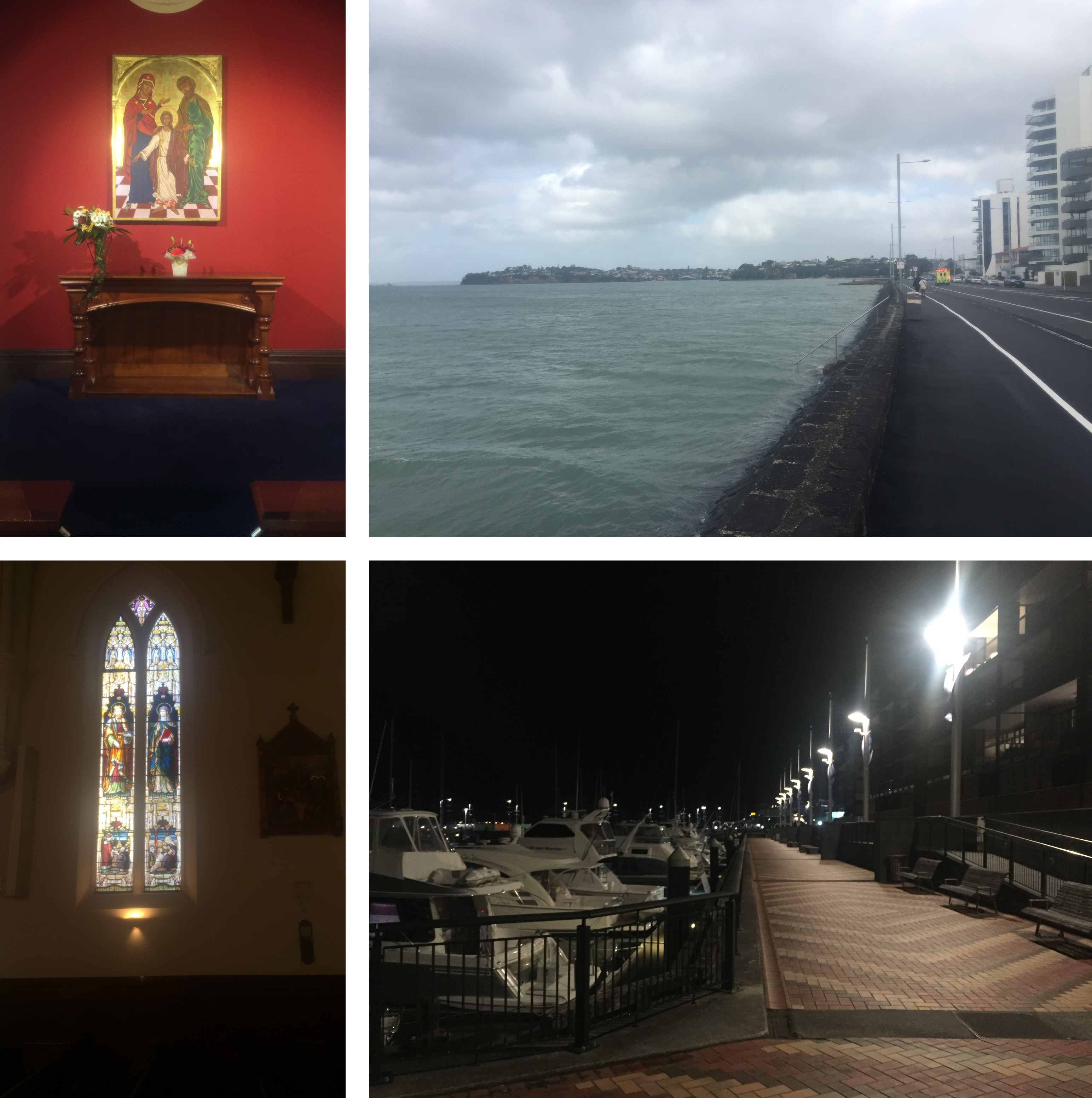 The last two days were surreal. Road trips, black sand beaches, triple-layer pies and whatnot. I realised how important it was to know how to drive a car as all the exotic places were around 200-300 km away from Auckland. As this was off-season, no buses were going to these locations as well. 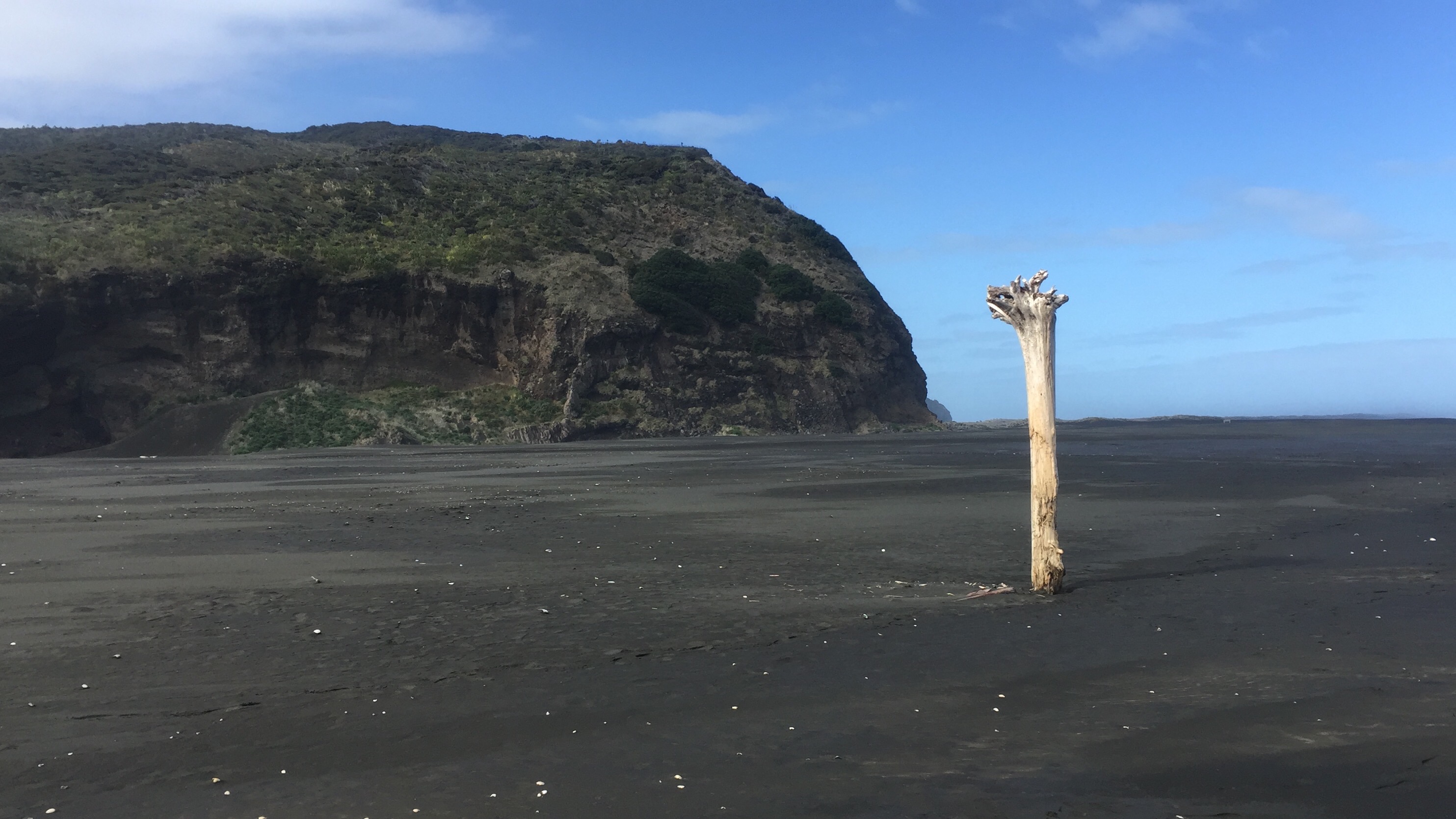 The first place we went to was the Waitakere Ranges. Kitekite Falls was the most scenic waterfall in the Waitakere Ranges. What was even more amazing was how relatively quiet and peaceful the experience was. Even the neighbouring picturesque Piha Beach was serene. To get to the falls, there was a 45 minutes hiking track which got me excited. The track was well-marked and even had wooden steps where necessary. After the falls, we went to the black sand beach. I was surprised to see that there was nobody there. We had the beach to ourselves but since the water was really cold, we could not go for a swim. 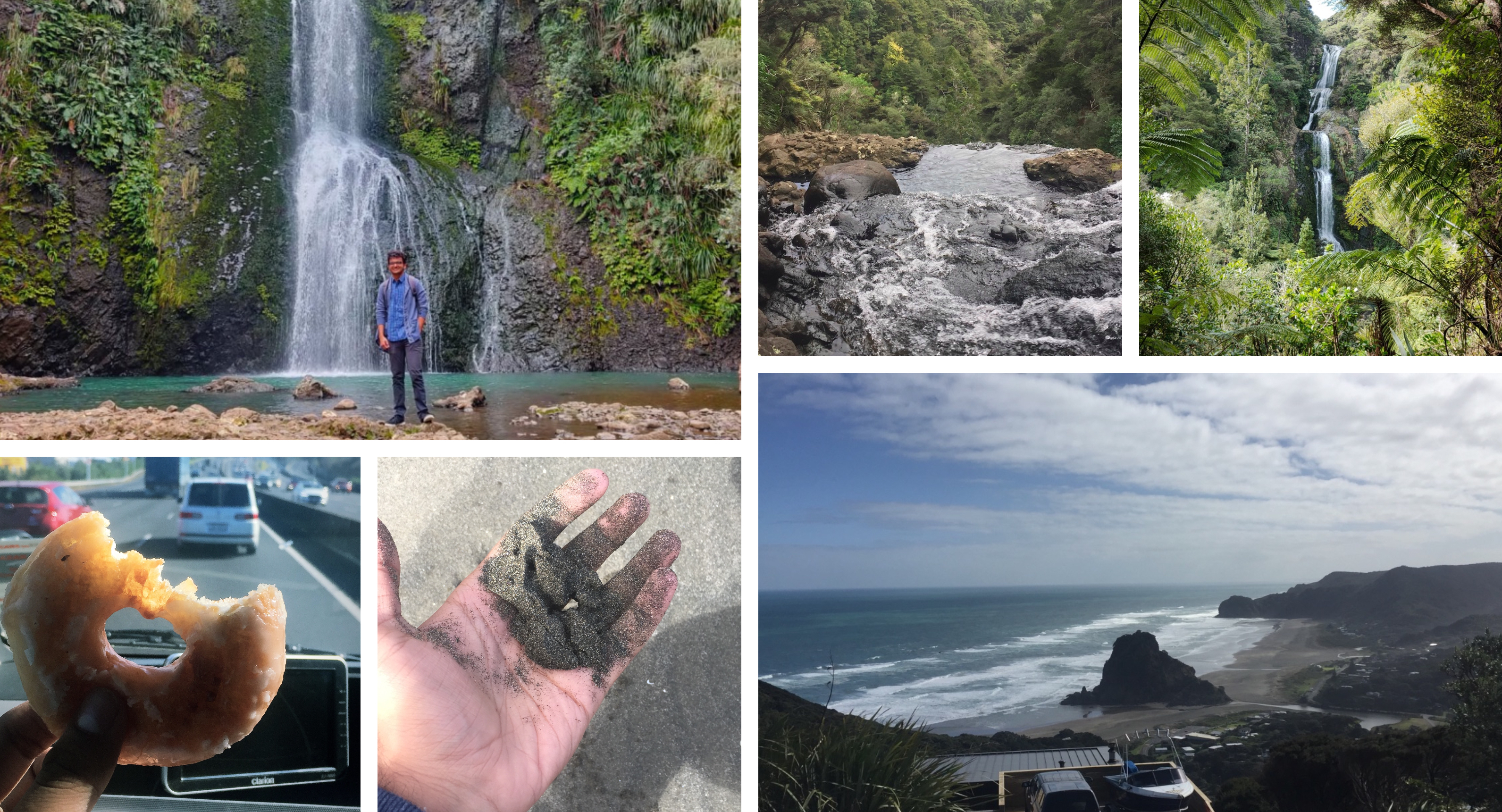 Next up was Piha beach. It was the most beautiful beach I have ever seen. The water was so clear that we could see the fishes inside. There were people in the water swimming with the fishes, snorkelling, etc. 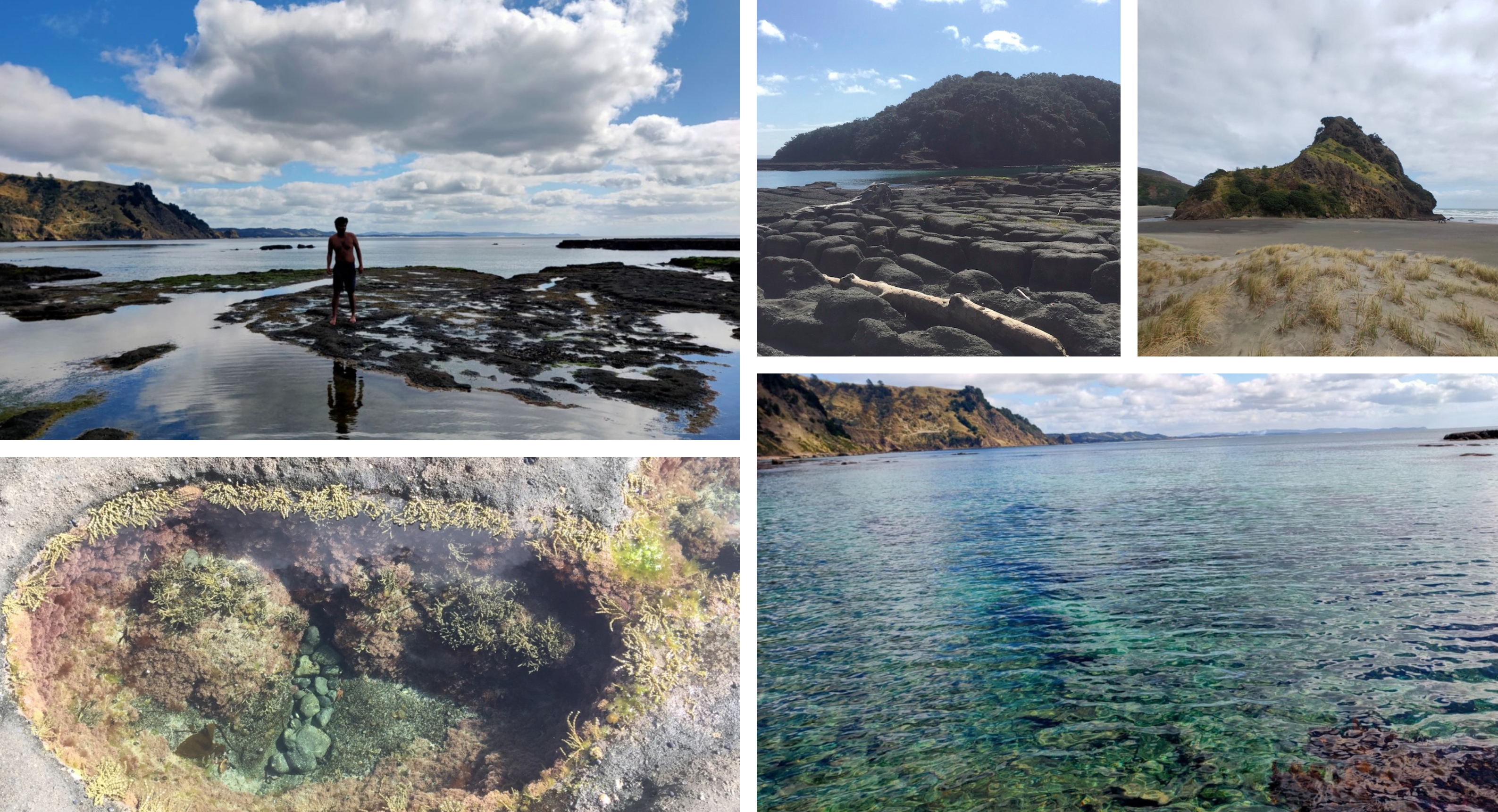 The last place we went to was Waitomo Caves. It was the farthest of all (around 400 km). The place is exactly how the website describes it:

Discover an ancient world 30 million years in the making and marvel at Mother Nature’s light display as you glide silently through the starry wonderland of the Glowworm Grotto. Experience the serene ambience as you enter this galaxy of tiny living lights. The glowworm (Arachnocampa Luminosa) is unique to New Zealand, making the Waitomo Glowworm Caves an absolute must-do. See thousands of these tiny creatures as they radiate their unmistakable luminescent light in a subterranean world. 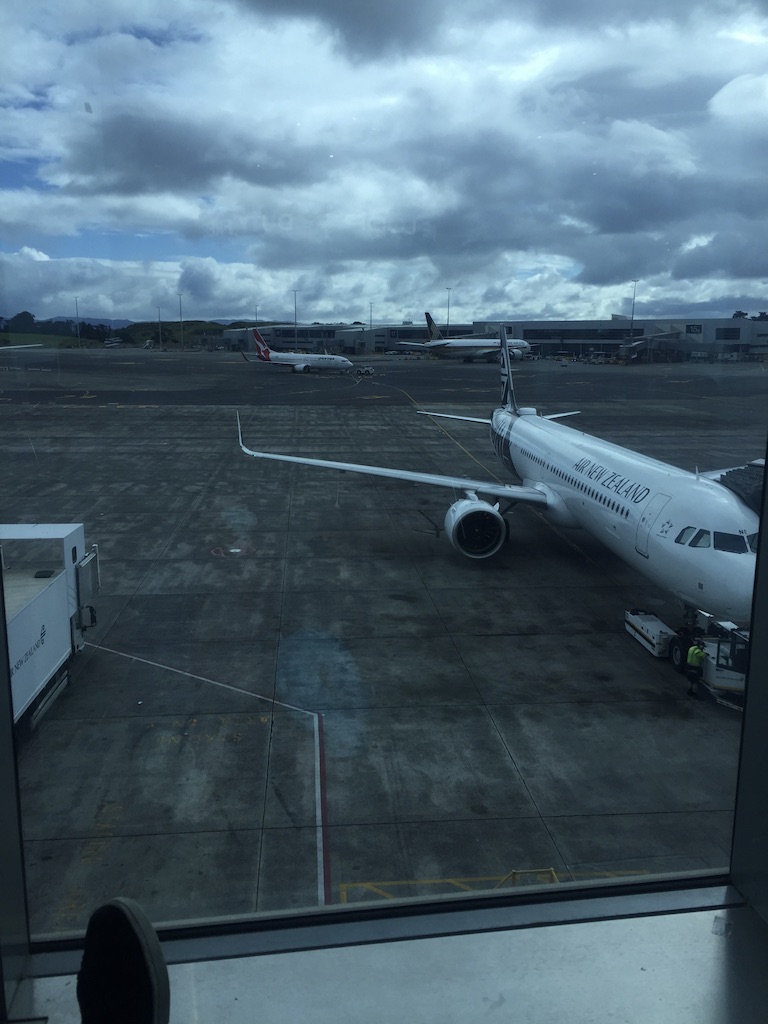 The caves marked the end of the trip. The night ended and we bade good bye. Next morning I had my flight back to Bangkok. While I was sitting and latching my seat belt, I remembered the last few days here in New Zealand. It was a great journey indeed.